To share your memory on the wall of Peggy Cameron, sign in using one of the following options:

Print
Peggy Jean Cameron (Hazlett), of Conway, passed away in Salem Place Nursing and Rehab on April 20, 2020 at the age of 88.

Peggy was born on July 4, 1931 in Frierson, Louisiana, near Shreveport.
Peggy attended school in Louisia... Read More
Peggy Jean Cameron (Hazlett), of Conway, passed away in Salem Place Nursing and Rehab on April 20, 2020 at the age of 88.

Peggy was born on July 4, 1931 in Frierson, Louisiana, near Shreveport.
Peggy attended school in Louisiana before meeting her future husband, Robert Lee Cameron, who was stationed at Barksdale Air Force base in Shreveport. They were married in 1951, and spent more than 50 years of their lives together in Oskaloosa, Iowa raising three children. Peggy was a homemaker and babysitter who liked to bowl, work in her flower garden and enjoy the many birds who would frequent their yard, particularly the colorful Cardinal.

She leaves to cherish her memories, two sons, James Robert Cameron of Conway, AR; Randy Allen Cameron (Marilyn) of Ocala, Florida; daughter, Debra Diane Carpenter (Merle) of Springfield, MO; one sister, Melva Ann Lagars of Mansfield Louisiana, 6 grandchildren, and 9 great-grandchildren.
She is preceded in death by her parents, and her husband, Robert Lee.

To send flowers to the family or plant a tree in memory of Peggy Jean Cameron (Hazlett), please visit our Heartfelt Sympathies Store.

Receive notifications about information and event scheduling for Peggy

There are no events scheduled. You can still show your support by sending flowers directly to the family, or planting a memorial tree in memory of Peggy Jean Cameron (Hazlett).
Visit the Heartfelt Sympathies Store

We encourage you to share your most beloved memories of Peggy here, so that the family and other loved ones can always see it. You can upload cherished photographs, or share your favorite stories, and can even comment on those shared by others. 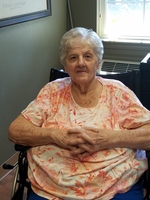