To share your memory on the wall of Richard Mays, sign in using one of the following options:

To send flowers to the family or plant a tree in memory of Richard Anthony "Tony" Mays, please visit our Heartfelt Sympathies Store.

Receive notifications about information and event scheduling for Richard

There are no events scheduled. You can still show your support by sending flowers directly to the family, or planting a memorial tree in memory of Richard Anthony "Tony" Mays.
Visit the Heartfelt Sympathies Store

We encourage you to share your most beloved memories of Richard here, so that the family and other loved ones can always see it. You can upload cherished photographs, or share your favorite stories, and can even comment on those shared by others.

Posted Aug 25, 2019 at 12:00am
Oh, Julie. I had no idea this had happened. I am seldom on Facebook.  I remember the holidays at your house in Benton with Wanda, LC and the animals.  Such great times!  I am so very sorry; he was a very kind man and a true gentleman.  My heart breaks for you.
Comment Share
Share via:
TL

Posted Aug 05, 2019 at 12:00am
Tony had a fun loving heart and he always put a smile on your face. His smile was so real and his hugs were heartfelt. Heaven got another beautiful angel and he will continue to look down on you Julia and watch and protect you. Keep his loving memories alive always. ??????
Comment Share
Share via:
MW

Posted Aug 05, 2019 at 12:00am
Tony was a great guy! Always smiling and joking around. He was always good to help me around my house & my dad’s with handy work smiling the entire time. He will be missed!
Comment Share
Share via:
MS

Posted Aug 05, 2019 at 12:00am
I was lucky enough to have spent many years with Tony and Julia at the chuckwagon races in Clinton. The memories are awesome. I am so sorry for your loss Julia. I spend a lot of time in Conway and would love to see you. Tony is in God’s hand now and in peace.
Comment Share
Share via: 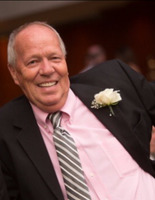